To be fair, it can be quite hard to detect social media scams and viral social media posts at times. Because they appear very real. And when something is fairly new, like a new way of scamming people, we aren’t yet aware of the possibility. Common sense tells us that the email we received saying we just inherited five million dollars from an unknown relative is likely to be a scam (especially if we have to pay the “lawyer” up front to get the details), but when your Facebook friend sends you a message saying their wallet has been stolen and they are overseas and need five dollars, that’s different. Only it isn’t. Both are scams.

Several clever people figured out that there’s nothing people are more curious about than who is social media stalking them (i.e. has a secret crush on them). However, it’s against Facebook’s terms to create an app like this, so it’s always a scam.

Facebook has never allowed you to see who has viewed your profile. If you sign up for this alleged app, all it does is steal your personal information (and possibly use it in various not so cool ways).

Wouldn’t we all like to spread some dislike sometimes? Erm. Maybe not. Still, there are ads saying you can install an app to show your dislike for some posts. If you click on the ad you’re taken to a site that will in one way, or another, scam you.

Also, with Facebook, or any other social media platform, if you receive an email from them asking you to sign in again as they suspect your account has been hacked, or something of the sorts, check the sender’s email address. Then go directly to the social media site and log in there. Don’t use the link in the email unless you know it’s legit.

Someone posts an image of a Starbucks (or other well known business) gift card with a link to a site where all you have to do is give your personal details and share the post, to receive a gift card. Only you won’t receive a gift card, because Starbucks didn’t initiate this campaign. Someone who wanted your personal information (or install malware/spyware on your computer) did.

Of course, there’s nothing saying Starbucks wouldn’t do a campaign where, in return for sharing something on social media, you’d receive a free gift card, or a discount.To know the truth, check if the post originated from Starbucks (check their official social media accounts and homepage) and if you click on a link, see what the URL says. If it says starbucks.biz or theofficialstarbucks.com it isn’t Starbucks.

Another excellent way of getting you to click on a link is to share celebrity news that you are curious to read. Once you click on the link, you are taken to a site that does you no good and probably doesn’t even share real celebrity news.

How to avoid this? Google the news instead of clicking on the link. If it’s true there will be plenty of real articles about it. Read more about reliable news on social media and the fake news. 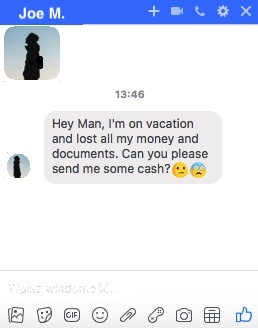 One of the most viral social media posts of all time is one that, at first, does not appear to be a scam. At least not if the scammer is clever.

Say you have a friend named Joe. Suddenly he sends you a message (sounding like Joe) saying he’s on vacation and he’s lost his money, passport, etc. and need some cash to get him through till he gets home.

You’re Joe’s friend. The message comes from Joe’s Facebook account. So you assume it’s Joe. Only it isn’t. It’s someone who has hacked Joe’s account or used malware of some form to steal all his contacts.

Our guards are down when we receive messages from people we know. We might not pay attention to details as much as we would if we spoke to a stranger. Scammers make use of this.

Best thing to do? Call Joe. If Joe answers sitting on his couch at home, drinking a beer, Joe didn’t send you that message.

While it may be pretty obvious to suss out that the London Pass is trying to fish for information about your travel habits when setting up a whole quiz where you answer questions about just that, only to find out what Shakespearean character you are, sometimes companies are less obvious and more dangerous. The questions used might not appear to be ones fishing for information.In fact, maybe they aren’t. What they’re fishing for is your cell number. They will send you the results via SMS. Only they’ll charge you for the SMS, or set you up for a monthly recurring fee for receiving something you don’t want to receive via SMS. Only you didn’t untick the hidden button saying you do when signing up. I’m not sure about you, but I don’t know how many messages I’ve received with viral videos saying something like “Check out this video – I think you’re in it” or “Someone’s posted picture of you drunk at a party.” These messages all have links. The links will take you to some site where you have to fill in information, such as your Facebook login details. Once you’ve logged in you’ll find out that there are no videos, or photos, of you. Instead, someone just wanted your Facebook login details so they can hack your account. Twitter and other sites that use URL shorteners are a blessing, aren’t they? Not least because you can fit a message in 140 characters, or less. However, once a URL has been shortened, you don’t actually know where the link will take you. A post saying it will take you to McDonald’s official site for a competition might, in fact, take you to some site that will infest your computer with a virus.

These kind of social media scams are almost impossible to detect unless the message preceding the link sounds dodgy. The best way to protect yourself is to install antivirus software. And yes, even if you have a Mac…

From #susanalbumparty, to #WaitroseReasons there are dozens of ways brands can fall victim to a...

Here’s our roundup of some of the best digital agency bloggers to keep you up to date with all...

The Science of Productivity: 5 Tips to Keep You Focused

The Science of Productivity: 5 Tips to Keep You Focused A workstation loaded with work and a...
Close