Fake news stories are a searingly hot topic right now. Some label it propaganda, others prefer to simply term the phenomenon “lies”. Whatever your perspective, there’s no denying that some of the content coming out of the fake news rumour mill is downright laughable.

What is fake news?

Fake news is type of information that consists of deliberate misinformation spread via traditional or online media. Fabricated information is the normal, which has sensational headline to mislead the reader.

The questionable media trend may be affecting everything from politics to social perception. Sometimes fake news veers so far away from reality that it becomes just plain ridiculous.

Here are 10 of the most preposterous fake news stories we’ve come across in the last six months. Do you have any to add to the list?

Sound the alarms and start digging your bunkers, everybody. Planet Nibiru (also known as Planet X and Planet Nine) ‘was’ to be on a direct collision course with Earth all the way back in March 2016. It must be true because NASA said so – apparently.

Except they didn’t and it isn’t. In fact there isn’t even conclusive proof that a “ninth planet” exists. Forget about Pluto, it’s a dwarf planet – okay? Let alone that a planet will smash Earth into smithereens or even bast us with big asteroids across the universe. You can now stop frantically stockpiling the tin of beans – unless you buy News4’s hype.

A WikiLeak’s hack of former US presidential hopeful Hillary Clinton’s emails triggered some pretty hysterical fake news stories. This was back in October 2016, including the “fact” that Ms Clinton herself believed in the imminent “Planet X apocalypse”. You don’t have to be a NASA rocket scientist to know that’s total bunkum.

The 2016 US Presidential election was a hotbed of fake stories, slamming and glorifying both contentious candidates. During the race, the (now defunct) fake news website WTOE News published a report. Apparently, in that report Pope Francis had broken with centuries of papal tradition. He endorsed a US Presidential candidate. – Mr Donald Trump.

Of course the Holy See said no such thing. After the fake news report went viral, reputable news source Reuters reported the Pope as saying: “I never say a word about electoral campaigns“.

4. Lottery-winning woman arrested for relieving herself on her boss’s desk

Fake news site The Valley Report claimed a 41year-old woman had been arrested for defecating on her boss’s desk. Also that happened after winning the lottery! The story went viral, spawning millions of shares on social media and lots of coverage from other, gullible news outlets. The whole thing, of course, was a fake. You only need to read the (frankly yucky) Valley Report original to realise that.

Some fake stories contain a kernel of truth. Although France did recently implement a “right to disconnect” law, the nation absolutely has not banned work emails after 6pm. Interestingly, this fake news story has surfaced more than once, first appearing back in 2014. Mon dieu.

A surprising amount of fake news came out of France in 2016. One reported that the iconic Eiffel Tower was on fire. In fact, a nearby fireworks truck accidentally caught fire close to the tower.  This caused the monument to be engulfed in smoke. The facts didn’t stop many purveyors of fake news jumping on the images and footage. They hyped the situation with groundless terrorist attack claims.

7. Woman murders roommate for sending too many Candy Crush requests

Here’s even more silliness from daft fake news purveyors The Valley Report. This extremely widely shared piece of fake news reported on the murder of a 19 year old Candy Crush addict. Her constant game requests drove her college roommate to bludgeon her to death with an industrial-sized bag of jellybeans. Clearly fake, but with 438,599 Facebook engagements, some readers bought it.

Another obvious fake, but one widely shared by 290,599 Facebook users and news sites.  The news that Saudi Arabian scientists had upgraded women to “mammals”. Apparently this represents a huge win for women’s rights in the notoriously unequal nation. This went viral right before International Women’s Day in 2016.

Supposed Amnesty International spokeswoman Jillian Birch claimed. “From now on, women will be considered as members of the mammal class, whereas before women shared the legal status of an object, similar to that of a home appliance”.

9. Harambe won thousands of votes in the US election

The late gorilla Harambe was widely reported to have accrued 11,000 write in votes in the 2016 presidential election. This was a number which many claimed could have tipped the scales in Clinton’s favour. In fact, this story was entirely fake and thousands of votes were not given to a dead gorilla after all. 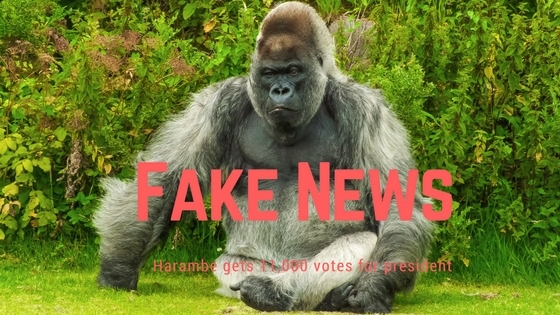 10. Hillary Clinton is a cannibal

Links to performance artist Marina Abramovic spawned a completely ridiculous torrent of conspiracy theories. In addition, there were false stories relating to the politician’s private life. From the ludicrous Pizzagate conspiracy, to claims of cannibalism and even that Hillary’s bout of ill health was the result of Kuru (a disease acquired by consuming human flesh). The whole episode was one of the most ridiculous fake news chapters in the whole presidential race.

At its best, fake news is entertaining but potentially misleading. At its worst, false news is downright dangerous. Its effects can be problematic for digital brands.

You may run a social media campaign and want to interact with breaking news. Or you simply want to share something your target markets will find interesting. You’ll always need to ensure you’re not disseminating false information. It’s important if you want to protect your business’s credibility.

Quick tips that will help you identify and avoid fake news

Our social media aggregator tool is fantastic for making the great content available to any of your digital marketing channels. In fact it ranges from putting positive tweets from consumers in the spotlight, to showcasing an Instagram post featuring your product. We know how important sharing good news is. But don’t get fooled into publishing something that’s not real… Our AI moderation tools are amazing. But to spot a fake it takes a sharp pair of eyes and healthy dose of scepticism!

Make the valuable visible. REQUEST A DEMO today to showcase amazing content which presents your brand at its best, or set up new account in a matter of clicks.

A recent study cited that 51% of people with online access currently rely on social media as a news...

A Social Media Aggregator: What is it and Why You Need One

Content aggregation is the new content creation. As marketers, we’ve heard a lot over the last five...

The Power of Content Curation Tools in The New Algorithmic Changes

When it comes to social media marketing, the only real constant is change. In many ways, we as...