A recent study cited that 51% of people with online access currently rely on social media as a news source. With these figures set to increase as social media platforms continue to grow in popularity.

But can we really trust this medium to deliver quality, reliable news? Or… Is there good reason to be weary over this change in the way people are now receiving their information?

Reliability of news on social media – Opening a Pandora’s box?

About ten years ago Twitter was still a relatively new thing. I remember being excited: finally people could report the news from source. We no longer had to rely on the (often) biased media to tell us stories. The people who were the stories could tell them themselves. They could tell them instantly being a reliable news source. Maybe the truth would finally set us free?

The Impact of Social Media on News Reporting

What’s more, news published by the media was now open for discussion. People could Tweet about it (and a tweet doesn’t just reach your friends list, but the world). They could add comments underneath articles, send articles to their friends with the click of a button. They could even influence all their friends on Facebook by sharing a certain article. You no longer had to write to the editor and hope for a featured opinion. Your opinion could now be everywhere. You could even start a blog, with just your opinions.

Can we still trust social media? 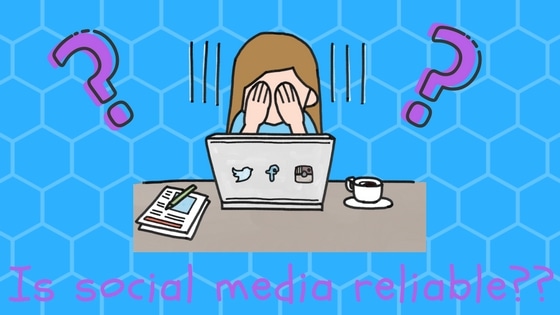 The issue(s)? People say that with great power comes great responsibility. Some journalists misused their power, but many journalists became journalists to be able to report the facts and share reliable news. Most people who shared what was happening on social media never stopped to check the facts. The truth grew ever increasingly subjective. Which leads to the remembrance of another great quote by George Carlin. “Never underestimate the power of stupid people in large groups.”

People tend to trust what they read in the news, because low and behold, it’s the news, which is written by trained journalists. When Facebook first caught fire, people started spreading images with due warnings about everything from Monsanto to onions removing flu bacteria from the air if kept in your bedroom. People read it and believed it. And while it was great that a corporation like Monsanto was exposed, urban myths also spread like wildfire. The same sensationalism that makes gossip go from one neighbor to the next, until the whole village knows, made fake news travel the world in a matter of minutes. Some celebrities were dead and then resurrected several times in the past decade as people have sent their condolences all over social media before finding out that it was a rumor, not a fact. Read more about most ridiculous fake news stories of all times.

How fast does news spread on social media?

Back in 2008 there was an earthquake in China  reported on Twitter, significantly before any other of the more traditional newswires, clearly displaying the advantages in delivering news quickly and effective, particularly in areas which were harder to access. Since then, we’ve seen a growing trend of major news breaking first on social media such as the death of Bin Laden, the uprisings of the Arab spring and, on a slightly less morbid note, the 2010 Royal Wedding announcement. A more recent event, the Las Vegas shootings, was also first reported on social media. No doubt, people warning of a shooting as soon as it happens is great as it allows for people to take the action needed, such as not entering Las Vegas/leaving their homes in Las Vegas, providing blood to hospitals, etc. And in the aftermath, social media also acted as a great tool to help raise funds for victims.

On the flipside of the beneficial work social media was able to achieve during the Vegas shooting, it also helped spread a series of hoaxes which were far less helpful. According to Wikipedia:

Stories linking the shooter to Antifa are also incorrect.This kind of information isn’t only a nuisance – it can be downright detrimental. After the shootings survivors received death threats saying they were part of a conspiracy and hired as actors to say the event actually took place. While it’s been seen time and time again that everything that the FBI and CIA report isn’t always true, these kind of uniformed reports are just as damaging.

….And the maybe not so ugly after all?

In short, if you combine social media news with verified sources, the truth may have a greater chance of emerging than ever before. To this algorithms may be part of the answer. After the Las Vegas shootings the top stories on YouTube released to the shootings were all conspiracy theories. In order to amend this, YouTube tweaked their algorithms. Of course, with that also comes the responsibility not to censor, but simply allow a better overview of the news. By the end of the day though it boils down to all of us to take responsibility for where we get our information, how we process it and what we choose to share on social media. Top of Google, or top of your Facebook feed, doesn’t always supply the truth. And if we want to help the general public to become aware of this, we have to educate them. We could….tweet about it… Or why not write a blog?
Blog roundups

A Social Media Aggregator: What is it and Why You Need One

Content aggregation is the new content creation. As marketers, we’ve heard a lot over the last five...

There’s no doubt about it: social networking has changed the way we live our lives. We’re more...
Close