The Value of Earned Media vs. Owned Media

By Toby Britton
Back to Blog

We’ve been around a few years now, since 2012 in fact. That may not seem like a long time but in tech industry terms it’s an age. That’s certainly long enough for us to have seen some different trends come and go and for us to update our business model…. We’ve never ‘pivoted’ but we have refined our focus from time to time.

One of the main changes to our focus over the last 24 months has been from owned to earned media. We have changed our marketing messages to highlight the ability of the Miappi platform to curate earned media (user-generated content) and not just owned (brand created) content.

The technology we use to discover, curate and distribute behind both types of media is identical. But the difference between the two types of content is huge. Marketers need to understand the value of earned content in order to get the best from their content marketing strategies. 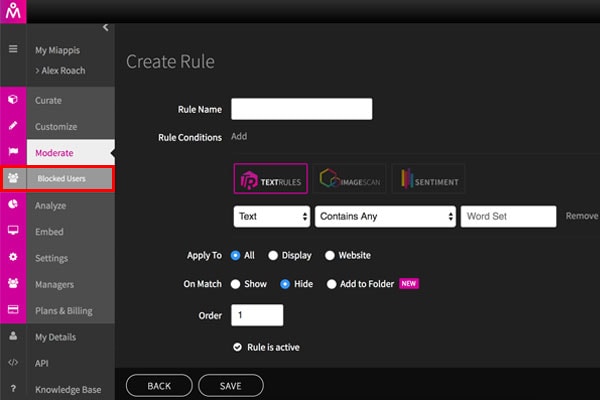 What is earned media?

By definition earned media is any content (positive or negative!) about your brand, its products and/or services that is produced by members for the public i.e. the people who have actually driven the car, taken that vacation, bought that phone. It is the online word of mouth spread in comments, shares and mentions about your brand. 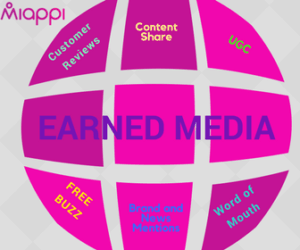 What is the value of earned media?

This is the age of honesty. People want it real. It might not seem like that sometimes (post-truth era and all) but when it comes to marketing real is the new glossy. The lustre has come off the overly-slick marketing campaign and people want honesty. Some big brands have known this for decades of course. I love the example of AVIS car hire who in 1962 launched their famous ‘AVIS is number 2. We try harder’ campaign. This was honest and it worked. Their sales rocketed.

It should come as no surprise that people believe their peers more than big brands. A brand will nearly always tell you that their product or service is better than the rest but if your friends are using a product or service and say it’s good then it probably is. In fact, in the social media age, even if perfect strangers are telling you it’s good you are more inclined to believe them – when was the last time you looked at TripAdvisor reviews? Pretty recently I’d bet. Even more ubiquitous are the ratings stars…TrustPilot, Feefo, Reevoo etc. If it hasn’t got a least 4 stars you’re walking away, right?  That’s the power of the ‘social proof’ generated by earned content.

What is owned media exactly?

If you as a brand have already distributed your owned content to social media then why would you use a service like Miappi to collect it again and redistribute it? Well there are a couple of very good reasons why that might happen. For starters, you get to massively extend the reach of that content beyond the walled garden of the social networks. You have spent time and resources creating this content so why confine it to the social networks?

There’s one more really compelling reason (perhaps the best of all) to redistribute your content using a visual marketing platform like Miappi: ~95% of your organic audience on social media never see what you publish. The social networks are keen to serve up content from friends and family first as well as paid advertising. That leaves very little space for your brand’s posts to be shared with your followers. If you want to give that content a better chance of being seen then collect it again and redistribute it to the places you know your target audience are going to see it.

In broad terms then, that’s owned media. What about earned content? With all the benefits of owned content redistribution it might be tempting to focus only on that. If you did though you would be missing a big trick. The name of that trick is ‘social proof’.

How to track earned media?

Miappi, and other platforms like us, let you collect earned media from a wide variety of sources. You can just add a hashtag to the feeds page of your Miappi dashboard and behold. All of the conversations around that hashtag start to pour into your dashboard… You have a stream of fresh (and free!) content saying things about your brand.

Okay, so maybe not all the things people say about brands using hashtags are favourable. If that is the case then perhaps it’s time to look at making some changes. All information is useful after all. But for most brands who want to collect user-generated content they will collect a mixture of good and less good comments.

Using Miappi you can then decide what to do with that media. You can carefully curate and moderate it so only the best bits are left. Otherwise you can take a more candid approach and let the bad stuff through (not the profanities and spam of course) to give a more balanced ‘honest’ view of your brand. However a brand wants to use Miappi they can make sure that the earned media is distributed far and wide to different marketing channels. The channels where the social proof it provides will inspire new levels of engagement and conversion from the customer!

If you think you might benefit from harnessing the power of earned content, why not get in touch or Request a Demo.

Earned media skyrocketed and landed in our marketing lives in 2016 but they are still as important and omnipresent as ever. Especially this year with what is happening in the industry, authenticity and real voices are crucial elements of a brand marketing strategy. Companies need more than ever to convince the consumers that they are real entities that can bring value in their lives. As a matter of fact,  85 percent of marketers started to prioritize earned media in 2018. If you thought that earned media and UGC was just a bandwagon on which you hesitated jumping, now it’s probably a good time to rethink that. Especially nowadays when technological advancements (e.g. AI) are making it possible to attribute the right amount of revenue to the right sources, earned media is here to stay.
Blog roundups, earned media

Why Earned Content is crucial to a Successful Marketing Strategy

The success of your marketing strategy is not always in your hands. It is the opinions of other...

Its pretty unlikely that you’ll make it through the day without seeing at least one digital sign....